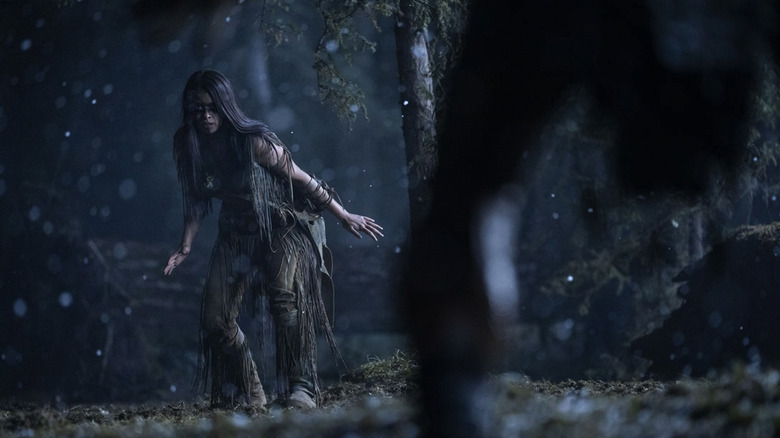 Dan Trachtenberg has created a bold return to form for the “Predator” franchise in “Prey,” a film that follows a young female Comanche warrior looking to track down the Predator that’s made her Nation’s forest into its hunting grounds. The streaming-exclusive movie is filled to the brim with rich social and character dynamics. Part western, part creature feature, and all bloody action, the film successfully checks all the marks of what makes a “Predator” film great. More than that, the film tells an intimate story of one hunter in a society that overlooks her because of her gender. Despite the odds and the indifference of some of her peers, her perseverance and belief in herself carries her through the film.

The overarching narrative of “Prey” is tied together by one tradition: “Kühtaamia.” Trachtenberg cleverly blends the Comanche Nation backdrop with the hunting motifs present in every “Predator” film, resulting in an engaging and thrilling story with a beating heart at its center that feels like a historical celebration of an underrepresented people as well as a kick-a** survival thriller. The ending of “Prey” is an action-packed reckoning, filled with compelling twists and a cathartic conclusion. Let’s take a closer look at that final hunt, and what led up to it.

A Deadly Rite Of Passage 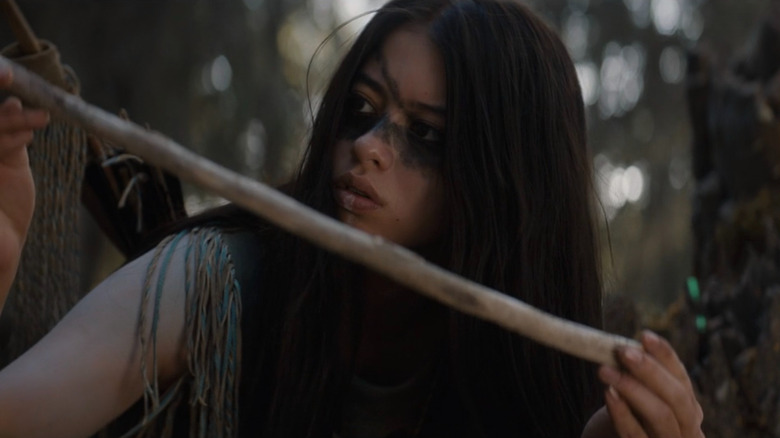 From the opening of “Prey,” we get to see the community of the Comanche Nation at work. The Predator’s ship drops the alien hunter off, leaving a red streak in the sky that our main character, Naru (Amber Midthunder), sees. Naru views this red streak as a sign, telling her brother as much; it’s time for her to participate in Kühtaamia. The Kühtaamia is a rite of passage for someone to become a warrior or hunter. A hunt in which your target animal is hunting you right back. Unbeknownst to Naru, the sign she saw in the sky is more literal than she realizes. The entirety of “Prey” can be seen as a build-up to this ritual, although none of the characters are truly aware of it until the film reaches its bloody end.

The film’s deep ties to the Comanche Nation can be credited to writer Patrick Aison, director Dan Trachtenberg (who co-wrote the story), and to producer Jhane Myers, who is Comanche herself. Her role as producer no doubt played a hand in the amount of representation on display in the film. It isn’t token representation, either, as Comanche culture and history is deeply seeded in the thematic elements of “Prey.” It’s all about the hunt. However, unlike other “Predator” films, there are literal Comanche hunters on display in this period piece, whose traditions and style of combat are very much grounded in real history. 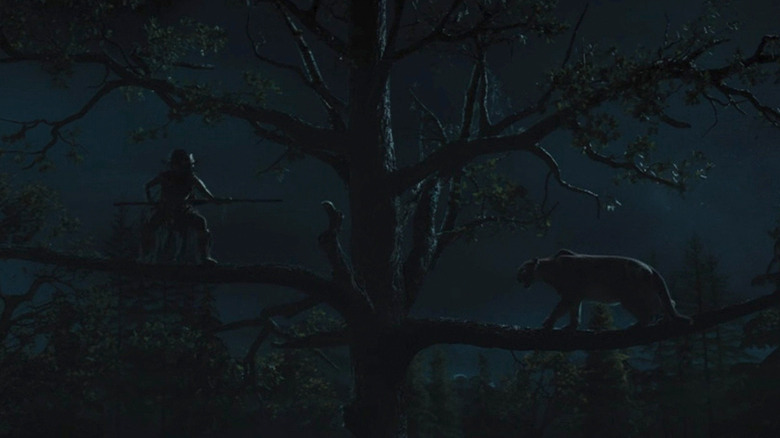 Throughout the film, Naru believes her true Kühtaamia is with the Predator, especially after her hunt for a lion ends with her being knocked unconscious. The events of the film serve as Naru’s trial, going through various encounters with the Predator and gaining a greater understanding of how the creature operates. Not only does this provide the film with intense action sequences filled with (sometimes a little too much) CGI blood, but we also see Naru use her ingenuity and strength to escape the Predator by the skin of her teeth. Unfortunately, her peers and fellow hunters don’t believe her stories of a strange new animal, with infighting leading to an ill-timed Predator attack that results in her being one of the few survivors.

Naru’s brother, Taabe, eventually sees the Predator for himself, realizing it’s what Naru had been tracking this entire time. Naru’s relationship with her brother has been the crux of the film until this point, with his input and wisdom helping to ground the young warrior as she inspires him to be a better leader for their people. A heartfelt moment in the film’s beginning has Taabe encourage her to “bring it home,” referring to the lion she unsuccessfully hunts. His words come back again, right before his death at the hands of the Predator. With Naru’s only emotional support gone, she’s forced to dig even deeper into her own strength and find a way to outsmart and turn the Predator into her prey, finally killing it.

A Visceral Battle Of Wits 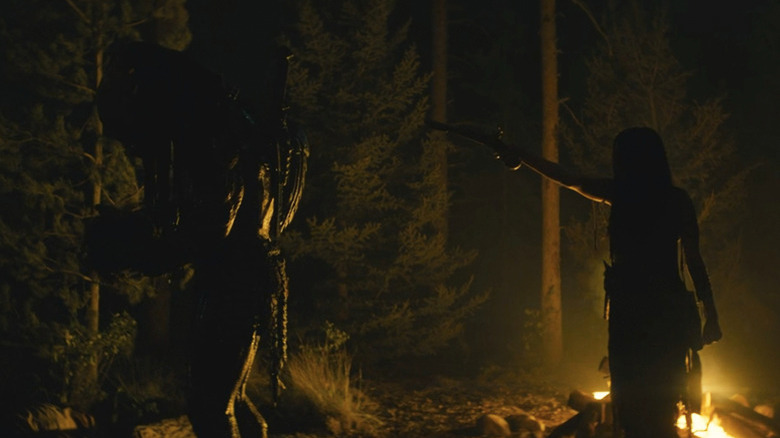 The revisionist themes of “Prey” become particularly evident in the film’s fast-paced third act, allowing for Naru and her hunt to serve as a symbolic triumph for the Comanche Nation. Look no further than her bait, a burly fur trapper whose crew was all but wiped out by the Predator in an earlier action sequence. Giving the fur trapper an unloaded gun, Naru gets her revenge on the trappers who kidnapped her brother and put him in the Predator’s crosshairs in the first place. The Predator kills the fur trapper, unable to see Naru’s body temperature, which she lowered using the local flora. Naru uses every encounter she’s had with the Predator up to that point as a way to counteract its alien tools and hunting methods. The third act is a visceral hunt, a deadly game of cat and mouse cleverly put together by Tratchenberg, with Naru outsmarting the Predator at nearly every turn.

The final hunting sequence is the film’s most thrilling and brutal battle, in which the movie’s tight script uses a variety of callbacks, such as Taabe’s earlier line regarding the Kühtaamia and Naru’s strategic use of a mud pit from which she previously escaped. With the Predator stuck in the mud and missing an arm, Naru mutters the words her brother taught her, with her prey now in her sights: “This is as far as you go. No more. This is it.” It’s a powerful full-circle moment that makes her victory over the Predator even more personal and cathartic. 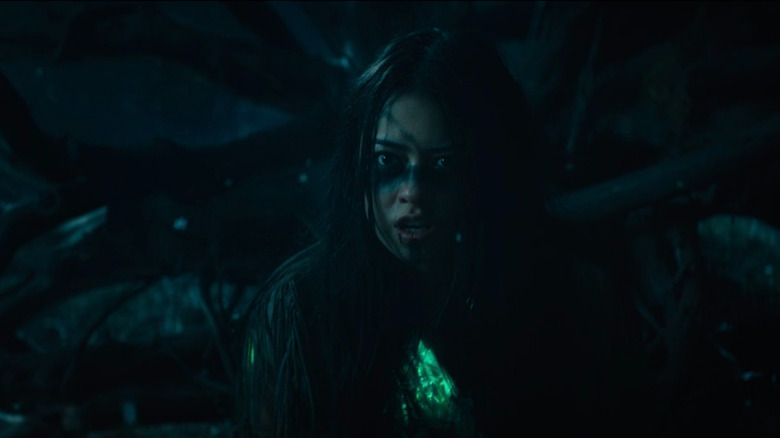 This final encounter with the Predator — and the creature’s death by its own tracking helmet — is what “Prey” has been leading to. Throughout the film, Naru has been underestimated at almost every turn, whether it was by her fellow Comanche, the fur trappers, or even her own brother. With this final confrontation, she is underestimated one more time, and Naru uses it to her advantage. While it is repeatedly shown throughout the film that the Predator is overwhelmingly stronger than Naru, she uses her swift reflexes and smaller stature to throw the Predator off balance, with Naru even stealing the Predator’s spear and dismembering the creature.

The Predator was over-reliant on the helmet at its disposal, using its tracking mechanism to kill many of Naru’s fellow Comanche. However, Naru’s ingenious plan to get the alien hunter stuck in the mud pit she was trapped in earlier and baiting it to use its targeting system leads the Predator to its ironic death. This grisly end is a testament to Naru’s sharp observation skills in the film and shows her as a force to be reckoned with. Underestimating Naru was the Predator’s last — and fatal — mistake. 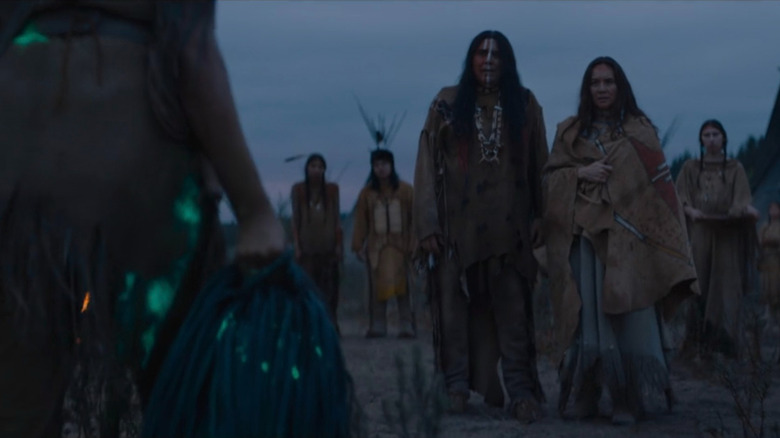 With a lean runtime of 1 hour and 40 minutes, “Prey” is a fast-paced and tightly scripted film. Trachtenberg wastes no space telling Naru’s story, which is centered entirely on this one intense hunt. The Comanche Nation is proudly at the forefront of it all, grounding the conflict in a tradition, celebrating its people’s rich history, and giving viewers an opportunity to educate themselves about Indigenous cultures. (The fact that there’s a Comanche language dub of the movie is an especially cool addition.)

The ending paints Naru in the Predator’s neon green blood, with its head in her hand. This moment is bittersweet, because while Naru was able to outsmart the Predator, the terror it wrought upon her tribe and the fur trappers left many of her fellow warriors dead. Despite all of that, Naru completed the Kühtaamia, and now she seeks to protect her people, warning them of the trappers in the area. While this hunt may be over, this certainly won’t be the last struggle for Naru and her people. Her future could still be further explored. 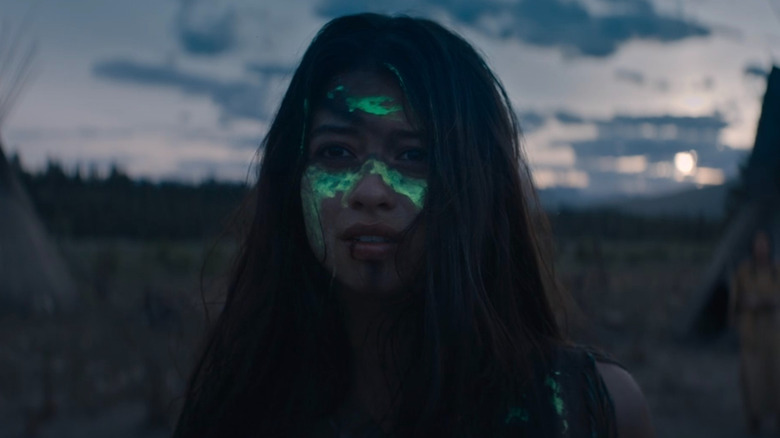 Where Naru’s story goes from here is anyone’s guess. Amber Midthunder embodied a compelling character whose journey could potentially carry on thanks to the social dynamics of the Comanche in the movie. With so many dead in the wake of the creature’s arrival, it only makes sense for Naru to take more of a leadership role within her tribe — even if women did not traditionally fill warrior roles in actual Comanche culture during that period. After all, if she could outsmart a ruthless alien hunter, maybe her tribe would be willing to break with tradition. It would certainly be a continuation of the revisionism the film had already established to that point.

With the end credits depicting the arrival of more Predator ships and the film ending with Naru and her people needing a new home, there is room for a potential follow-up story. Now that Naru has more than proven herself as a warrior, it would be interesting to have Naru help lead with the potential struggles that lie ahead. For now, though, “Prey” ends its story with the end of the Kühtaamia, and Naru being honored by her tribe. It’s a touching moment that mirrors the honors her brother Taabe received much earlier in the film after finishing off the lion.

“Why do you want to hunt?” Naru’s mother asks her daughter in the opening minutes. “Because you all think that I can’t,” Naru replies. Our heroine started the film wishing to be viewed as an equally of her brother and her fellow warriors, and ends it triumphantly returning to her camp with the severed head of an otherworldly hunter. Predator has officially become prey.

Read this next: 95 Best Sci-Fi Movies Ever

The post Prey Ending Explained: This Is As Far As You Go appeared first on /Film.

In Praise of Citizen Ruth

How This Stanley Kubrick War Movie Influenced HBO’s The Wire